Road salt application is steadily altering the natural chemistry of the environment. Plants and animals are adversely affected by the rising levels of chloride in fresh water ecosystems. 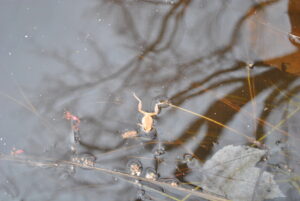 Chloride is toxic to aquatic life even at low levels. High chloride levels in surface water can inhibit some species’ growth, reproduction, and impact food sources.

If you live in the New Hampshire Ossipee Watershed region (a sub watershed of the Saco River Watershed), chances are, your drinking water comes from the Ossipee River Basin Aquifer. The Ossipee Aquifer is the largest stratified drift aquifer in the State of New Hampshire.  Stratified drift aquifers lie within sand and gravel deposits laid down by meltwater rivers that drained the continental glaciers while they were retreating from this area approximately 15,000 years ago.  Because they consist mainly of sand and gravel, they are more vulnerable to contamination due to their extremely permeable soils. The high transmissivity of water in aquifer recharge areas means that potential contamination sources in one town can impact groundwater quality in another town, as water knows no boundaries. 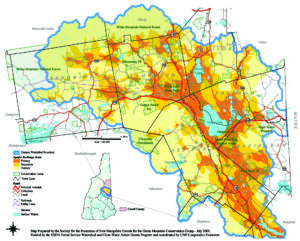 What Is Road Salt?

Both sodium and chloride are conservative ions: they never go away and are very soluble in water
Na+ (Sodium) Cl- (Chloride)

Sodium is the sixth most abundant element on earth, and it is found soils, plants, water, and foods naturally. It is
also a very water-soluble element meaning amounts can quickly increase in waterbodies. Groundwater typically
contains higher concentrations of salts than surface waters due to leaching from soils and bedrock. Human
activity can increase sodium concentrations in surface waters from sewage and industrial effluents and the use of road salts to control snow and ice.

Chloride (Cl-) is an element that is naturally present in most water bodies. Concentrations are typically low and depend on geology, atmospheric deposition, and human activities. The salting of roads during winter periods can contribute significantly to increases in Cl- concentrations and causes salt levels to be very seasonal in areas where road salt is used in the winter.

Road salt is a sodium chloride mineral called halite (also known as rock salt). Rock salt is mined from large underground deposits that formed after prehistoric oceans evaporated. In the U.S., Ohio, Michigan, New York, Kansas, and Louisiana all host vast salt mines. Rock salt is mined in vast quantities from around the world and shipped to major city ports and then distributed to smaller municipalities or businesses for use as road salt.