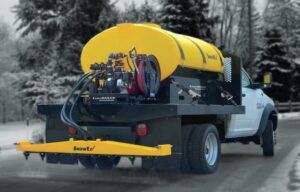 Brining has been shown to be effective for ice removal, and is cost-effective too. It takes approximately four times less salt to prevent ice build up than it takes to remove ice after it has formed.

What is salt brine? Salt brine is a solution of salt (typically sodium chloride) and water. It has a freezing point lower than pure water and, as such, is a useful tool in reducing the adhesion of snow and ice to road surfaces

The benefits of brine:

Adding a coat of salt brine for roads such as the one created by Texas Brine has several advantages over waiting after a snowfall to add rock salt. When water freezes, its molecules are organized and fixed. To melt it, impurities need to be added to lower the melting point and make it easier to remove. If a coat of brine is already present on the road, as soon as the snow touches it, the salt hinders the water’s ability to create a rigid structure and melt it with ease once the snowfall is over.

It is easier to prevent a road from freezing than melting the snow once the road is already icy. After a snowfall or freezing rain, the ice layer that is closest to the road tends to be quite difficult to remove and requires a significant amount of salt to melt. On the other hand, brine prevents that first layer from getting too rigid facilitating the process of its removal.

A road brine mixture works much faster than rock salt. The reason for this is that the mixture works almost immediately after the first snowflake comes in contact with the salt in the brine which disrupts the molecular structure of water allowing the pavement to de-ice quicker.

Sticks on the road

A significant portion of the rock salt used to melt the snow gets blown away by the wind, which means salt needs to be added almost constantly to maintain the process of melting. When a road brine mixture is used, the salt remains on the road, and the melting process occurs more smoothly resulting in a cleaner and safer road.

It takes more rock salt than salt brine for roads to melt an icy road. It is also easier to transport it because the amount required is much less and applying a liquid over a horizontal surface is easier than pouring solid salt all over the road.